Once linked with the likes of Tottenham and Arsenal for €60m or so, Cengiz Under’s stock took a sharp drop during the second half of the season.

Corriere dello Sport take a look at the Turkey international’s situation on Tuesday, where they explain his ‘disastrous’ 2019 has really hurt his and Roma’s chance of getting a big move, with the list of interested sides dwindling.

However, following claims in the English press that Everton saw a bid of £24m or so rejected by Roma, the Italian newspaper mention the Toffees as ‘especially interested’ in the winger, facing competition from Borussia Dortmund, but they dispute the bid reports.

According to the Italian newspaper, Roma have only received one offer (it’s not mentioned who from) in recent weeks for the 21-year-old, and it didn’t even reach €20m. 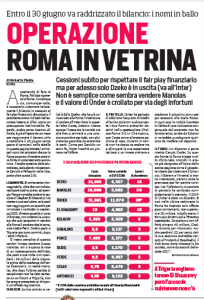 That’s someway off what has been reported in England if Everton are the mysterious bidder.

Beyond that, Corriere state that without €40m on the table, Under will be playing for Roma next season in hope he can turn things around under a new manager and help his valuation and stock return to its former glory.

It makes sense for Everton to try and get him now, especially if they can get him for cheaper, but they’ll still need to cough up €40m to do so.