PSG are looking for a midfielder during the current transfer but don’t have a great deal of money to spend.

The Ligue 1 side are stuck due to FFP regulations and that means they can’t simply throw increasingly large amounts of money at clubs and players.

Donny Van de Beek of Ajax is the latest name on the list, with PSG finding it hard to secure other targets, including from the Premier League.

Thursday’s edition of L’Equipe has a feature on the possibility of signing the Dutchman and details some difficulties elsewhere… one of those being at Everton. 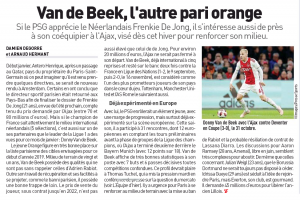 This is considered as the Toffees being ‘greedy’ by the French newspaper.

Gueye has a contract at Goodison Park lasting until June 2022, after he signed an extension less than a year ago. The 29 year old starts almost every game for Everton, so of course they’re not simply going to be compliant and help PSG out with an attractive fee.