Everton are interested in Torino midfielder Daniele Baselli, with the 28-year-old of particular interest to manager Carlo Ancelotti.

That’s according to Tuttosport, who believe the midfielder could be targeted this summer with the club facing a raid on their top talent.

While the likes of Andrea Belotti, Simone Zaza, Salvatore Sirigu and Armando Izzo are likely to be at the top of many club’s lists, several others in the squad could be targeted.

Baselli is one oft hem, having enjoyed a solid campaign, making 21 appearances in all competitions and managing four assists in total.

He has several suitors, with Everton, Napoli and Lazio all keeping an eye on him according to the newspaper.

Everton’s interest stems from manager Carlo Ancelotti, who it is claimed has a ‘special interest‘ in the Brescia born midfielder.

Whether the Blues have yet made an approach isn’t mentioned, although the likelihood is that Baselli is simply on a list of potential targets, with it well established Everton are on the hunt for a central midfielder this summer. 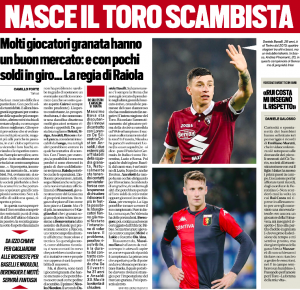 What’s interesting is that this isn’t the first time Baselli has been linked with a move to Goodison Park, with reports in 2016 indicating they were keen.

That was under a completely different managerial team and structure, but perhaps his name has remained on a list, and as fate would have it, Ancelotti is a fan, leading to this new interest.