Finding a striker in the transfer window is no easy feat, and it was a task that Crystal Palace and Everton had mixed success with this summer.

Both clubs went into the window in search of a new number nine, with goalscoring a problem for both of them last season.

Everton achieved their aim, managing to sign Moise Kean from Juventus in one of the more surprising moves of the summer. In comparison, Palace had to content themselves with signing Jordan Ayew from Swansea City.

However, it seems the pair could have been competing for the same striker at one point, with L’Equipe reporting they were keen on Jean-Kévin Augustin this summer. 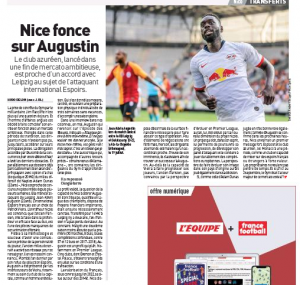 The newspaper says that the two clubs made enquiries about the forward back in July, asking what sort of terms would be required for a transfer.

The Premier League duo weren’t the only ones interested, with the report stating as many as five clubs were after the RB Leipzig striker.

Augustin, though, wasn’t interested, with it stated he turned down the chance of going to England, which makes it curious why Palace were reportedly chasing him as a replacement for Wilfried Zaha on deadline day.

As for his future, Nice in France are reportedly now close to signing the France U21 international, with Patrick Vieira turning to him to bolster his frontline in a move believed to be worth around €20m.