After Marco Silva’s arrival at Everton, the Toffees started having regular scouts in Portugal, watching several league games in the country.

Now despite the manager’s departure from the club, it seems they’re not giving up on checking the talents from his home country.

As reported by newspaper O Jogo today, Everton had officials at the Estádio da Luz last night, where Benfica defeated Braga 2-1 in the Portuguese cup.

Despite an opener from the away side, the Eagles managed to make a comeback with goals scored by Pizzi, who was man of the match, and Carlos Vinicius. 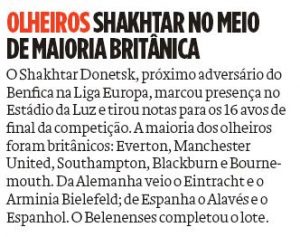 This isn’t the first time the Brazilian striker scores a decisive goal, so perhaps it’s time for Premier League sides to start keeping an eye on him.