Towards the end of the summer transfer window, Everton were repeatedly linked with a move for Leander Dendoncker.

Anderlecht have been all over the place on price, contradicting themselves in links and direct quotes to the Belgian media, but back then the fee was said to be as high as €38m.

A week after the window closed, Belgium’s DH said Christophe Henrotay, the midfielder’s agent, had been in contact with Everton on August 24th but nothing materialised.

This month it’s been mainly West Ham linked, then on Friday Het Nieuwsblad brought Everton back into it, and it all sounds really positive for the Toffees.

West Ham interest has been backed up repeatedly in Belgium but right now there doesn’t appear to be anything happening, Dendoncker doesn’t seem to be David Moyes’ priority.

Het Nieuwsblad believe West Ham weren’t impressed with their last scouting of the player and moved on to other targets.

That doesn’t mean Dendoncker’s Premier League dream is dead, because Everton are a possibility. Sam Allardyce’s club are said to again be showing interest, and it’s pointed out there’s a good relationship between Everton and Anderlecht, following the Henry Onyekuru deal.

The Belgian newspaper believe a deal similar to Onyekuru’s could be done, with 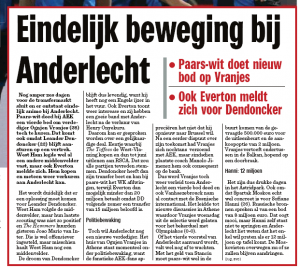 Dendoncker spending the rest of the season at Anderlecht having already secured a move to Everton.

That could even see the transfer price going down to €15m, with the player apparently already assured he can go in the summer for that.

Leander Dendoncker may not be quite the finished article, and in Belgium there can often be suggestions he’s a bit overrated in England, but the 22 year old is a clear talent and at €15m it would look an absolute bargain for Everton.