Home Premier League Everton Everton in contact with former Bundesliga manager, must be a matter of...
SHARE

German magazine SportBild have a feature this week on the situation at Bayer Leverkusen and that includes looking at Roger Schmidt’s future.

The German manager was released from his duties at the weekend, but still has a contract with Leverkusen until June 2019, meaning the club have to continue paying his wages or come to a compensation agreement.

SportBild don’t think that will represent a huge problem because they explain there’s a lot of interest in Schmidt. Several clubs are said to have contacted the manager via middlemen, and one of those is Everton.

Everton are quite happy with their current manager Ronald Koeman, who joined in the summer from Southampton, so the claim doesn’t make a great deal of sense. The only way 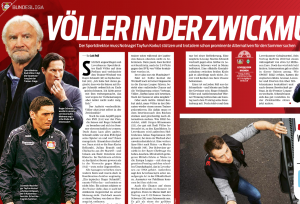 there could be any rational reasoning is if Everton are planning just in case they lose the Dutchman.

It wouldn’t be the craziest step in forward planning but it has to be doubted that Everton are so worried over Koeman that they’re contacting other potential managers.