Home Europe “In Everton, it was too complicated for him” – Player’s father explains...
SHARE

Moise Kean’s father has claimed it was ‘too complicated’ for the young striker to stay at Everton this summer.

The Italian striker sealed a move to Paris Saint Germai, joining the French champions on loan for the rest of the season.

The transfer came as something of a surprise, with it, long believed that Carlo Ancelotti was keen to work alongside him at Everton despite a disappointing first year there for him.

Ultimately the Italian coach has decided to let him go, though, and his father Biorou Jean Kean, says that is because he didn’t belong at Goodison Park.

“Thanks be to God, he is at PSG. I want to thank everyone for that,” he told Le Parisien.

“Especially the Parisian leaders but also his agent, Mino Raiola, who is one of the best agents in the world and who knows how to manage my son.

“In Everton, it was too complicated for him. The club hired more expensive and more experienced strikers than him, and he would have played little.”

The temporary departure brings an end to a disappointing first year at Everton, in which he managed just four goals in 37 games.

Those were not the sort of numbers the Toffees were expecting when they signed the highly-rated youngster from Juventus last summer, in a move that many considered something of a coup.

Finding the root cause of his troubles has not been an easy task, but his father believes it was a failure to adapt to life in England that cost his son. 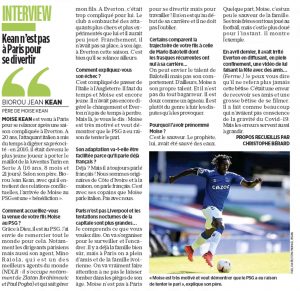 “It’s complicated to move from Italy to England,” he added.

“It takes time, and Moise is still young. He hadn’t yet digested the change, and Everton has no time to lose.

“But I’m telling you: Moise is very motivated and wants to show that the PSG was right to take the gamble.”