Everton are chasing the Benfica defender Morato, according to claims from the Portuguese press on Thursday.

Newspaper O Jogo is the one who says the Toffees have been interested in the 18-year-old, having been impressed with what they’ve seen from him so far.

Their latest scouting mission to watch the Brazilian was on Tuesday, when they had an official see him in action against Liverpool in the UEFA Youth League.

Morato is said to be a player indicated by Marco Silva, and even after the manager’s departure, the club continued to follow him. 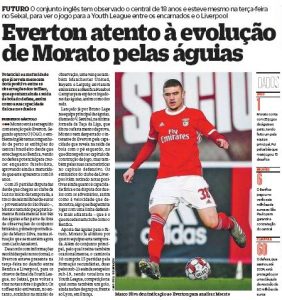 O Jogo writes that Everton have been impressed with Morato’s capacity to build up play with his left foot. They also like his speed and how well he does in physical challenges.

Currently protected by a release clause of €60m, the defender is still fighting for a place in Benfica’s first team, having made only one official appearance for them so far.