Home Europe Everton centre-back ‘starting to look around’ at exit – Has been ‘offered’...
SHARE

If it wasn’t enough that Lucas Digne is currently looking for a way out of the club following a falling out with Rafa Benitez, Everton’s Yerry Mina is also thinking about an exit in the near future.

That’s what Corriere dello Sport are claiming, reporting on Wednesday that the Colombian ‘is starting to look around’.

His contract at Goodison Park expires in 2023, and Milan are on the lookout for a player of his type.

It’s said the Serie A side have had ‘many players offered to them such as Yerry Mina’, who is currently out with an injury. 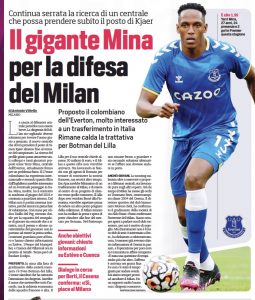 Corriere make it clear that ‘no negotiations have started from Milan because they are still in the full evaluation phase’, and Sven Botman remains their favourite, but the Everton man seems to be on their list.

Whether or not anything comes from all this remains to be seen, but what seems apparent is that someone out there is offering Mina’s services around and the Toffees’ defender wouldn’t be against a change of scenery in the near future.