Home Europe Everton ‘can advance with offer’ to land midfielder – €20m should be...
SHARE

Even though there haven’t been any big developments in Everton’s chase for Sporting midfielder Matheus Nunes lately, it seems there’s still some expectation that a bid could be made in the final weeks of the transfer window.

The Lions are still to make a big sale this summer, and as the Portuguese media takes a look at their squad today, they identify a couple of midfielders as those most likely to leave.

Newspaper Record writes about João Palhinha and Matheus Nunes. Regarding the latter, they say Everton ‘have been pointed as the main interested’ club in the player, although there are others in the race.

It’s said Sporting set a price for his sale, and if a €20m bid is delivered, then ‘the business can advance’. 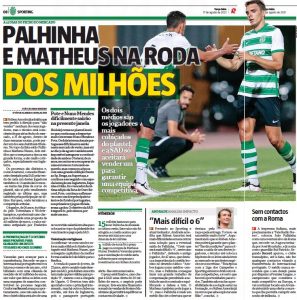 Newspaper Correio da Manhã lists a few more players, with Nunes included again. Regarding the Brazilian, they say ‘the English from Everton can advance with an offer of around €20m that takes the player from Alvalade’.

So even though we haven’t seen any recent claims about the Toffees making new efforts for the player, his exit is still being considered. The Lisbon side would certainly like to make a big sale to help their financial situation, and perhaps Rafa Benitez’s side could take advantage of that in the coming weeks.