It is clear the midfielder has no future at Camp Nou and in the summer, he is more likely to leave the La Liga winners on a permanent transfer.

On March 21st, Onda Cero reported the Portugal international will join the Merseyside club on a permanent deal and it was treated like a certainty.

The Sun in England reported Tottenham Hotspur are closely following the 25-year-old and Spurs could use the Champions League football to lure the player to join them.

Mundo Deportivo takes a look at the situation and they claim the Spanish champions have so far not yet received any firm offers from the north London outfit.

It is claimed that Marco Silva’s side are currently ‘better placed’ to complete Gomes’ transfer in the summer.

Before the start of this campaign, the Toffees signed Lucas Digne and Yerry Mina on permanent deals from Barca.

These two transfers plus Gomes’ loan move has resulted in the leaders of the two clubs sharing a good relationship and this could prove vital in Everton’s efforts to sign the the former Valencia man. 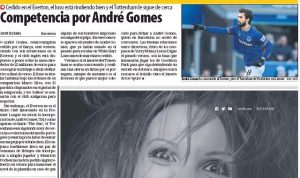 Everton are willing to table a €25m offer to make Gomes’ loan move permanent after he impressed under the former Watford manager at Goodison Park.