On August 19th, we relayed news from Spain that Marcel Brands is ‘key’ in Everton’s pursuit of Atlético Madrid’s Santiago Arias.

Brands knows the defender first hand, having signed him for PSV Eindhoven in 2013.

Today’s edition of AS explains the La Liga side are planning to bring in a new midfielder and a forward this summer.

However, Diego Simeone’s side ‘need to sell players’ before making any new additions to the squad.

It’s claimed there are several players who can help Atlético ‘make money’, and Arias is among them.

One of the three right-backs available at Atlético, the newspaper states the Colombian is the ‘chosen’ one to leave to the club. There’s a good market for him in England and that’s when the Toffees get a mention. 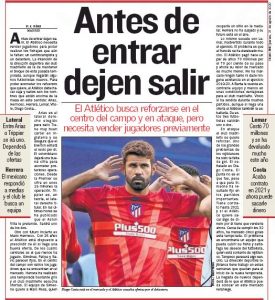 AS suggest there’s belief at Atlético that Everton will do what’s needed to get him to Goodison Park in the ongoing window.

According to the claims, Arias ‘will leave a good figure’ as his sale is expected to generate an income of €15m for the Madrid club.