Napoli midfielder Allan has a choice between Everton and Atlético Madrid this summer, with a departure from the Italian side ‘inevitable’.

The midfielder has long been linked with a move away, having seen his relationship with Napoli deteriorate following a failed move to PSG last summer.

The relationship has worsened in the last few months as he’s found himself on the periphery since Gennaro Gattuso’s arrival as manager, which has led to widespread speculation he will be moved on, and Everton have been linked since the January transfer window.

A move never happened then, but the rumours have continued nonetheless, with Carlo Ancelotti thought to be keen on a reunion at Goodison Park.

So far they are yet to strike a deal but La Repubblica report it is between them and Atlético Madrid this summer.

They say that those two clubs ‘represent the main choices’ for Allan, whose lack of form has ‘disappointed expectations’ in Naples. 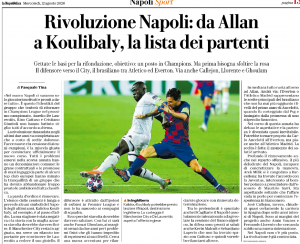 So much so that his departure ‘became inevitable’ and so there is a chance he ‘may return’ to Ancelotti at Everton, although Atlético Madrid also like him.

Either way, ‘the time to say goodbye has arrived’ according to the newspaper, who very much present the idea that Allan will be leaving at some point.

Where to remains to be seen, but as we’ve known for some time, Everton are very much in the race for his signature.