Bjorn Engels has been linked with moves to several Premier League clubs.

When at Club Brugge, the player made clear his desire to move to English football, and that perhaps encouraged reports of interest.

At the time, Engles was considered a great prospect in Belgian football and one who could go on to great things, including representing his country regularly.

Speaking to L’Equipe this weekend, Engels told the French newspaper: “I was frustrated that the leaders said no when clubs had made offers. But Brugge blocked me because we played the Champions League in September. Or he asked for €15m. It’s huge for a Belgian defender while Mitrovic, a forward with twenty goals per season, he was €20m.”

L’Equipe says the club who were told they’d need to part with €15m was Everton, and there were links over a Goodison Park move at the time. 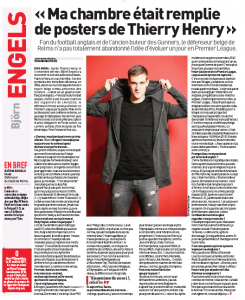 Engels then had some struggles with form, with fans suggesting it was down to his head being elsewhere, something the 24 year old strongly denies.

Eventually moving to Olympiacos, it didn’t go too well and Engels is now spending the season on loan at Rennes, getting his career back on track with the help of Ligue 1.

He still has those dreams of a move to the Premier League.