Home Premier League Arsenal Everton and Arsenal keen on Bundesliga’s man of the moment – Both...
SHARE

Everton and Arsenal are among the clubs keeping an eye on Benito Raman ahead of the summer transfer window.

The Fortuna Düsseldorf player has four goals and three assists in his past five matches, and has ten goals for the season as a whole.

Flexible in position, the 24 year old has been finding his recent success on the right for Fortuna, and it’s attracting attention from England.

This week’s edition of SportBild says Everton and Arsenal, along with Burnley and West Ham, have all been sending officials to Fortuna Düsseldorf regularly, so they can see how Raman is getting on.

The price isn’t a problem for any of the Premier League sides. The German magazine say Fortuna’s ‘pain threshold’ is €15m, which means they don’t want to sell but if someone reaches that figure then financial management dictates they should.

Raman himself is keen on a move to the country, quoted as saying: “It’s my goal to play at Premier League someday. 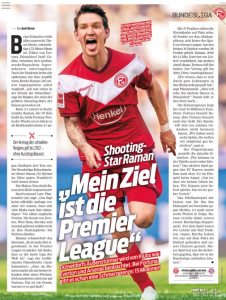 For now, it’s probably best to keep watching, there doesn’t appear to be any concrete moves from anyone at this stage.