Boubakary Soumaré left Paris Saint-Germain and made the switch to Lille in 2017.

The 20-year-old has only one start and 13 more appearances from the bench in the league this term. He has made four appearances in cup competitions.

Even though the defensive midfielder has four starts in the league over the last two seasons, there have been several clubs chasing him and he clearly has admirers in the Premier League.

Friday’s edition of L’Equipe explain that Everton and Manchester City are ‘particularly’ interested in the Frenchman as his name has ‘often returned to the ears of English recruiters in recent weeks’.

Soumaré has a contract with the Ligue 1 outfit until 2022 and Lille have no plans to part ways with him in the summer, despite interest from the Merseyside club and Pep Guardiola’s side.

It’s also claimed that Lille rejected approaches from AS Monaco and Valencia last summer and Newcastle United and Watford in the winter market.

With his club teammate Thiago Mendes expected to leave in the summer, the French club’s plan is to give Soumaré regular first team opportunities next season. 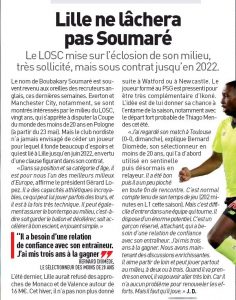 While explaining his qualities, L’Equipe says Soumaré ensures the right tempo is maintained in midfield and knows when to ‘keep the ball and decelerate, or speed up wisely, playing simple’.

Kicker say Chelsea signing ‘to be finalised next week’ – Werner...