Everton manager Carlo Ancelotti has claimed his backroom staff at Goodison Park is the best he has ever worked with.

The Italian coach has had a varied career to date, working for major European clubs such as AC Milan, Real Madrid, Bayern Munich and Paris Saint Germain.

Like any manager, particularly those in the modern game, that has seen him assembling big teams behind the scenes as he looks to eke out the best of the squad at his disposal.

Everton are no different, with the Blues bringing in the likes of Francesco Mauri and Simeone Montanauro when they appointed Ancelotti in December.

Among the appointments was his son Davide, who has worked with his father in several of his jobs around Europe and joined him as his assistant at Everton.

The pair naturally have an interesting work dynamic, and when asked about it, Ancelotti was full of praise for Davide and the rest of the team behind him.

“I don’t know how to tell you… This is probably the best aspect of my job today,” he told France Football.

“In Naples, they still say I went there to put my foot down. But my son is smart. He loves sport.

“He has studied, more than I have. He has a doctorate in sports science, which he validated in Germany.

“He was one of the youngest graduates. He loves the experience, as he has been with me since my time at the PSG, where he was a physical trainer, as he was at Real, by the way. 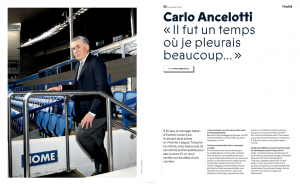 “Then he became one of my assistants at Bayern. Here I have a very young staff, with an average age of 32-33. But he is competent and motivated.

“There’s little criticism what can be said on the outside. This is probably the best staff I’ve had in my entire career.

“And I’ve had some very good ones elsewhere, with an assistant like Paul Clement for example. But they are always looking for something new.”