One of the bigger names at Lazio these days, Luis Alberto had everything going for him last season.

The former Liverpool midfielder was assisting aplenty, playing a key role in the Serie A side qualifying for the Champions League.

However, things have changed since then following the player’s complaining on Twitch about his club spending money on a new airplane instead of paying their employees’ wages in full during the Covid-19 crisis, which has led to talk of an exit, with Everton mentioned more than once.

There’s been a few suggestions he could leave, despite him still being a regular starter for Simone Inzaghi, and the rumours refuse to go away.

His change in situation has affected his performances, and while he renewed earlier on in the year until 2025, clubs, including Everton, are aware he might need a new landing spot.

Gazzetta dello Sport explain that ‘already in January, his name could resurface on the market’, with no one able to ‘swear that the paths of Alberto and Lazio won’t separate in 2021’. 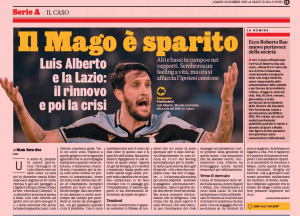 The Italian newspaper name a few interested parties currently ‘sharing the attention’ on him, including Paris Saint-Germain, Everton, Sevilla, Milan and Juventus, making life a bit awkward for Carlo Ancelotti if he did want to bring the Spaniard to Goodison Park.

That’s tough competition, but perhaps the chance of starting anew in a fresh league at an in-form club might just be what Luis Alberto needs.