Everton are doing ‘more and more’ to sign Allan from Napoli this summer, with the Italians waiting on a formal offer to arrive.

That’s according to Il Mattino, who cover the midfielder’s future yet again today as speculation about a move to Goodison Park continues to ramp up.

The Brazilian midfielder has been linked with a move to Goodison Park since January when the Blues were said to have made a bid for him.

Obviously, the transfer didn’t happen, but there has been a constant stream of speculation that they would return this summer as Carlo Ancelotti plots a rebuild on Merseyside.

Those rumours have picked up over the last week, with reports claiming Allan is the ‘express wish’ for Ancelotti this summer and that Everton had even upped their bid to €38m to try and secure his signature.

That rumour came courtesy of Il Mattino – who were being cited by several Italian outlets – but they provide a different outlook today.

According to them, Everton are doing ‘more and more’ to sign Allan this summer but are yet to actually make an official bid.

That is something Napoli are waiting for so they can ‘start negotiating’ with the Blues about a potential transfer.

This has been backed up by Italian journalist Giuseppe Cannella, who had this to say when discussing Allan’s future on Marte Sport Live, relayed by Area Napoli.

“Allan? He is valued by Carlo Ancelotti, Everton’s current coach.”

“Can he go for 30 million? As they say, sell and repent. Between the fee and how much he earns in wages, he’ll go.” 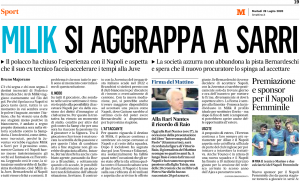 That’s all that either has to offer, but the sentiment is clear, Everton want him, and it’s increasingly likely he’ll leave this summer.

For what price remains to be seen. Everton aren’t awash with cash this summer, and while Napoli seem keen to sell, Aurelio de Laurentiis is not a man who offers up discounts on his players.

Indeed, we’ve already seen reports he wants as much as €40m for Allan this summer, which is a price Everton are unlikely to want to pay.

It’ll be down to Marcel Brands, who has a history of bringing prices down, to reduce that fee and get Ancelotti the midfielder his team desperately needs.