Home Europe Everton have ‘stepped up’ interest in defender after giving up on Gabriel...
SHARE

Everton are keen on Napoli’s Allan and Nikola Maksimović with the Italian side looking to raise €50m for the pair.

That’s according to Corriere del Mezzogiorno, who back up reports that Everton are interested in the two players this summer.

Allan has long been linked with a move to Goodison Park, with the first reports of their interest dating back to the January transfer window.

Their interest in Maksimović is new, though, with it emerging this week that they were looking at the Serbian defender having seemingly given up in the race for Gabriel Magalhåes.

CdM say that is the case, stating that Everton have crossed Gabriel’s name out with a no on their shortlist of defensive targets.

That has led them to look at Maksimović, who is looking increasingly likely to leave Napoli this summer after entering the final year of his deal.

Gennaro Gattuso’s recent decision to leave him on the bench for the Champions League clash with Barcelona has ‘generated discontent’ with the player, who was close to signing a new deal worth €2m per season.

Thus, Everton have now ‘stepped up’ to try and lure him to Goodison Park, and Napoli have made it clear they want €50m for the pair. 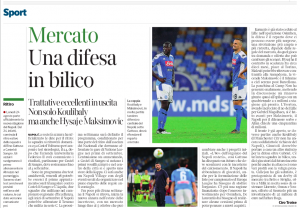 The newspaper does not reveal how that €50m would be made up between the two players, although it is a figure that makes plenty of sense.

Reports have indicated Napoli want at least €30m up front for Allan, while the initial reports about Maksimović had them valuing the defender at €20m, hence the €50m.

That, though, is probably more than Everton are willing to pay, and there’s every chance that Marcel Brands will be negotiating hard to get the price down and pull off a double deal at a more acceptable price to the Toffees.