Everton are the ‘most dangerous’ of the suitors for Roma full-back Alessandro Florenzi this summer.

That’s according to La Nazione, who back up claims from yesterday that Everton are interested in the right-back.

Yesterday we covered a report from Italian journalist Gianluca di Marzio, who stated that Carlo Ancelotti is keen on the 29-year-old and that Everton ‘will make an attempt’ for him at some point.

The report made sense as it’s been well established the Blues want cover for Seamus Coleman and it’s yet to be known what their plans for Jonjoe Kenny are.

La Nazione have now backed that up, stating Everton have shown their interest in the ‘last hours’ and that they are ‘probably the most dangerous’ of all his suitors.

They don’t make it clear why that is the case, or if the Blues have even been in touch with Roma over a move, just that there interest is there.

This information, though, clashes directly with what’s being reported in England, where it’s been claimed that Everton are in advanced negotiations with Atlético Madrid over defender Santiago Arias. 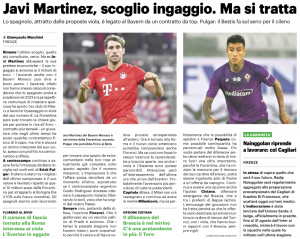 That would suggest a move for the Italy international isn’t likely, although perhaps the reality is that they’re looking at both this summer.

Florenzi could have been the option presented by Ancelotti, while Arias is being pushed by Brands, who signed him for PSV Eindhoven when in charge there.

Both are on the list of possible additions, and Everton’s Director of Football is exploring which deal is better in a window where money is likely to be tight.