Home Europe “Even worse than that” – Spurs’ Kane talks about missing out on...
SHARE

For Harry Kane, normally the centre of attention on the pitch at Tottenham, missing out on the Champions League quarter and semi-finals was tough.

He’s never hidden it, and when sitting down with Marca in Spain ahead of the Champions League final against Liverpool on Saturday, the England international delved into it a little deeper, going through all the emotions coursing through his body during those games.

He said: “Can you imagine it? Yeah? Even worse than that. We won, so it’s okay that I didn’t play (laughs). It was incredible. We went through tremendous emotions in absolutely crazy games. I’m so proud of what we’ve done.

“When you watch from afar, without having control of what was happening on the pitch, you see your teammates struggling, suffering. It was really special seeing them play, believe and win. Wherever you are tomorrow, in the stands or on the pitch, I’ll be ready to do all I can for this team and all I know is I want to win this game”.

Much like half the Tottenham team, it seems, Kane’s future has often been talked about over the years, and Marca couldn’t let this opportunity of having the Englishman in front of them without asking him about a potential transfer to Real Madrid. 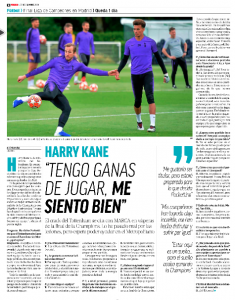 Year after year, the 25-year-old has been linked with a move to the La Liga giants, always on the lookout for a new striker for the post-Benzema era, yet Daniel Levy constantly stands in their way, and this summer will probably be no different.

Regardless, Marca gave it a shot, asking him if he would be looking for a new team after the Champions League final.

Kane replied: “At this moment, I’m only thinking about the game. When it’s over, I’ll go to the England squad for the Nations League and then I’ll relax to be ready for the next season. I haven’t thought about anything”.

Just as the interview was about to finish, Marca tell him Real Madrid are looking for a striker in the upcoming transfer window.