Given Jamie Vardy’s status at Leicester City, it’s hard for other strikers to come in and get the chance they would want.

Several have struggled at the club as a result of Vardy’s continued excellence, and one of them was Islam Slimani.

The Algerian arrived in 2016 for £27m as Claudio Ranieri looked to bolster his forward line.

His time at Leicester was not a happy one, though, as he managed just 13 goals in 46 appearances for the club. Now on loan at AS Monaco, but still owned by Leicester, the chances of a successful career with the Premier League club are slim.

His biggest issue was trying to get in the team as he struggled to supplant Jamie Vardy, the undisputed first-choice in the Foxes attack.

He would make just 18 appearances under Ranieri and even fewer under his replacement Claude Puel, for whom he made only eight appearances during the Frenchman’s reign at the King Power stadium. 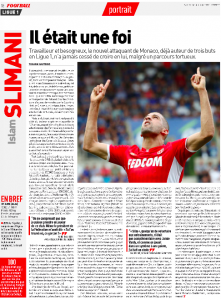 admitted Vardy was the issue, but praised Slimani nonetheless.

“Slim was always willing in training, but he was not complementary with Jamie Vardy, and as we played in a system at a peak, I made a choice,” he told L’Equipe.

“He will have more possibilities in Ligue 1, and since he has been looking for efficiency for many months, he is vengeful.

“He participates a lot in group activities, on the field and in the locker room. Even when he’s not playing, he’s endearing; he’s not bitter about it.”