Leicester City’s focus since January on the transfer market has been to sign a new right-back.

First came the news they were after Benfica’s André Almeida before turning their attention to Marseille’s Bouna Sarr, who only started playing there this season under Rudi Garcia.

Doing well in Hiroki Sakai’s absence, the Guinea international caught the eye of Claude Puel, who allegedly bid up to €5m, a bid swiftly turned down by the Ligue 1 side.

Nowadays, everything points towards the Foxes focusing their attention on Porto’s Ricardo Pereira, with claims Leicester are close to signing the Portuguese defender. 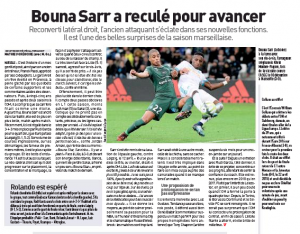 However, were they to fail in that endeavour, they might feel forced to turn their attention back to Bouna Sarr, which L’Equipe on Wednesday suggest won’t be an easy deal to pull off either.

Why? Because since Claude Puel expressed an interest in the makeshift Marseille defender, more clubs have come knocking; Borussia Dortmund, Sevilla and Torino.

Considering there’s some hefty European sides in there, and Marseille are currently fighting for a Champions League spot with Lyon and Monaco in Ligue 1, money might be Leicester’s only chance here.

That, and the attraction that is Premier League football.