There’s been a lot of talk of Christian Eriksen potentially leaving Inter in the January transfer window, but that’s all it’s been: talk.

So far, nothing concrete has landed on the Serie A side’s desk, but there is one club still considering something before the end of the month: Tottenham.

That’s according to both Gazzetta dello Sport and Corriere dello Sport, who have briefs tidbits on the former Spurs man’s future and potential return to London.

The former explain ‘Inter will let Christian Eriksen leave before the end of the window only with a paid loan or a full transfer’, and the ‘only club’ who ‘keep sending some signals are Tottenham’. 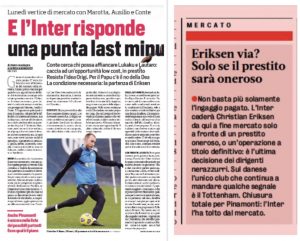 Corriere dello Sport corroborate this, explain that an intermediary has been offering the playmaker around the Premier League ‘for weeks’, and while nothing concrete has arrived, ‘a few signals’ have, ‘especially from Tottenham’.

José Mourinho and co. are reportedly ‘thinking about bringing him back to London’, and it would be interesting to see if it had anything to do with Paris Saint-Germain wanting Dele Alli.

Perhaps if the Englishman does leave, the door then opens for Eriksen?