Barcelona’s Ronald Araújo is set to sign a new deal at the Camp Nou.

His current deal runs down in 2023 and prior to agreeing an extension, the 23-year-old attracted interest from the Premier League.

Manchester United have been frequently named as the main contender in the past few months, with some reports even indicating the Red Devils presented a proposal to the Uruguay international.

Thursday’s edition of Mundo Deportivo explains the defender’s renewal at the Catalan club is ‘well on track’ and ‘practically the only thing left is to find the date’ for the signing. His new contract will be until 2026 and it will include a release clause of €1bn.

It’s claimed the centre-back ‘always intend to stay’ with the Blaugrana, despite attracting interest from elsewhere.

After Araújo’s ‘explosion’ at the La Liga side, several Premier League clubs, ‘especially Manchester United’, ‘tried to convince’ him with ‘dizzying offers’. 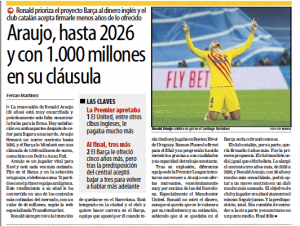 Mundo states: ‘Ronald didn’t look at the money, although he did want to be valued for his performance and stock price, knowing that if he stayed at Barça, [he] would be charging less’.

From the beginning, it felt like Manchester United and a few other English clubs were dragged into this saga to put pressure on Barcelona to meet the demands set by Araújo and his camp. The latest news would indicate they seem to have been successful in this regard.