Two months ago, we relayed news from Germany that Manchester City have ‘moved into position’ for Borussia Mönchengladbach’s Denis Zakaria.

It was also stated the player has been a long-term target for the Citizens.

This week’s edition of SportBild has a report on four Borussia Mönchengladbach players with contracts expiring in 2022, and their chances of staying at the club beyond this season.

The 24-year-old is among them and the magazine explains the Swiss midfielder is still to regain his best form since recovering from a serious knee injury last November.

That hasn’t stopped the player from drawing attention from England, ‘especially Manchester City’, who are interested in the defensive midfielder.

Marco Rose’s side wanted to tie down Zakaria to a new contract, but he has ‘refused’ to sign an extension. Therefore, the ‘probability that he will stay’ with the Bundesliga side is at ’10 percent’.

In order to prevent Zakaria from leaving the club as a free agent in 2022, SportBild explain ‘a transfer is on the way this summer’. 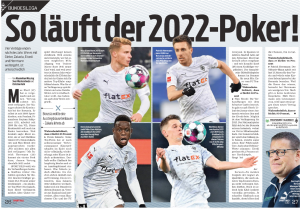 In other words, Borussia Mönchengladbach sporting director Max Eberl, who signed a new contract until 2026, will look to cash in from Zakaria’s sale at the end of this campaign.

Fernandinho’s contract at the Etihad expires in the summer and should he decide to leave City, Zakaria can be an ideal replacement for the Brazilian.