If you’ve been following our website over the past couple of days, you will have noticed an increase in Liverpool articles involving Italian players.

First there was the Reds’ interest in Federico Chiesa, but it’s been made very clear that Juventus aren’t interested in selling their star, which has led Jürgen Klopp and co. to move onto Domenico Berardi.

The Sassuolo forward is far more affordable than his compatriot, and Corriere della Sera state that while Milan have made their own interest known, it’s ‘especially Liverpool’ who are in for him.

It’s explained those at the Premier League club, meaning Klopp and his staff, were ‘fascinated by the movement and attacking ability’ the Italy international has to offer. 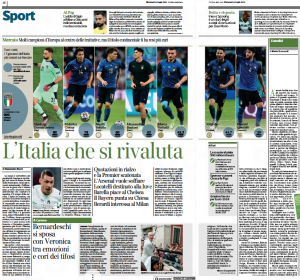 As for his price, the player was valued at around €30m before the Euros, but his performances throughout the tournament mean that has now risen to €50m.

It’s expensive, but it’s also about half of what Chiesa is worth these days, and while he might not be quite as good as the Juventus man, he certainly offers a similar threat that Klopp could mould at Anfield.