Another day, another Ousmane Dembele article from the Catalan media.

The player’s reported attitude problems have been a constant story over the past few weeks and it’s bringing question marks around his future, as Sport cover on Monday.

A potential transfer has been discussed at several periods since Dembele moved from Borussia Dortmund, and whilst it’s been ruled out previously the story just keeps coming back.

The Frenchman moving in January is largely ruled out, but his situation at Barcelona is described as ‘particularly delicate’. Whilst there’s said to be no doubt at the club about his football potential, there’s growing doubt over whether he’s prepared to commit himself enough to reach the highest level.

Should a sale be decided upon, then Sport say Dembele ‘has a market… especially in the Premier League… Especially from Liverpool’.

Jurgen Klopp is presented as interested, and whilst Thomas Tuchel and PSG get a mention, it’s stated a move to England ‘seems designed’ for the player and his attributes.

Liverpool are the English club to be linked most at the moment, taking over from Arsenal.

Elsewhere in their Monday paper, Sport take a look at just what the problem with Dembele’s attitude is.

It’s explained the footballer lives in Barcelona along with some childhood friends, and they stay locked up in his house.

When he missed training recently, he was ‘untraceable for more than an hour’ before the club managed to get through on the telephone to find out his was sick with gastroenteritis. 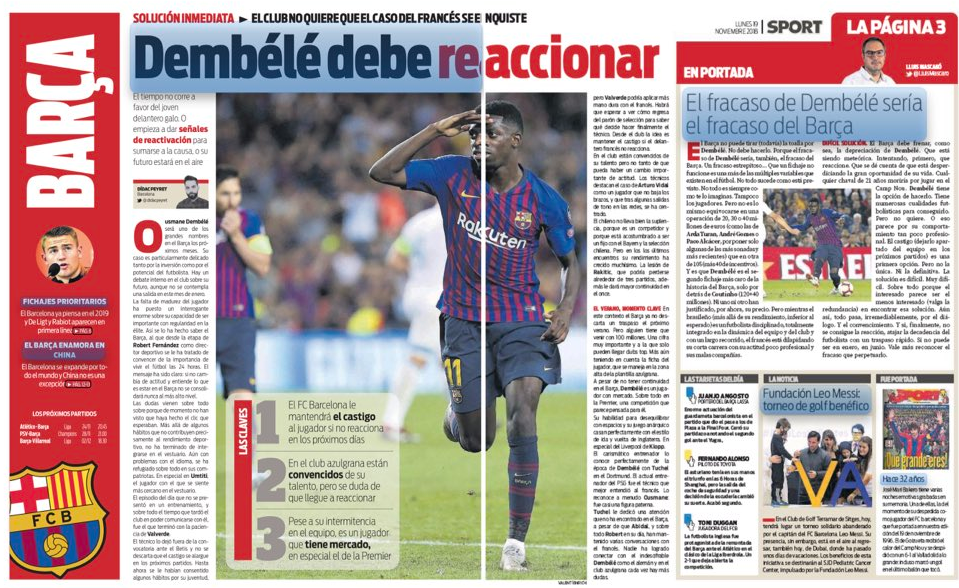 A doctor was soon sent, and Sport say all the blinds were shut and the door was answered by one of Dembele’s friends.

The newspaper adds that the person who opened the door was ‘One of the few who was awake. And what the doctor found in the halls of the house of Dembele, before seeing the player, was several young people sleeping around the house when it was almost twelve noon. Dembele, who was the last to wake up, attended to the doctor and explained his feelings. His stomach hurt, but it seems that the doctor could not certify anything out of the ordinary in the French striker’s health. Of course, he recommended that he stay in bed.’

Sport finish their article by saying: ‘Ousmane must change his life, focus more on Barcelona, ​​his work, live like a professional and put aside, even for a while, his games with friends on the PlayStation.’

Manchester United call player back, so it’s easier to manage his likely exit

Southampton have ‘become aware’ of player in hunt for Höjbjerg replacement – ‘Prepared’ to pay €11m, move ‘cannot be ruled out’

Manchester United call player back, so it’s easier to manage his...

Southampton have ‘become aware’ of player in hunt for Höjbjerg replacement...

“I completely fell in love with it” – Player says Stamford...