Chelsea are a ‘candidate’ for Barcelona forward Ousmane Dembele as his contract negotiations continue to falter.

That’s according to L’Equipe, who say there is plenty of Premier League interest in the Frenchman, but it is ‘especially Chelsea’ who are pushing for his signature.

As you’ll be more than aware at this point, Dembele is out of contract at the Camp Nou this summer and has yet to find an agreement for an extension.

That means he is free to negotiate with whomever he likes this month regarding a pre-contract agreement for a free transfer in the summer.

Several big sides in Europe are all thought to be keen on the player, but L’Equipe put Chelsea at the front of the queue today.

They say the Blues are ‘following him closely’ and that they are ‘among the candidates’ for him this month.

The player has never hidden his ‘attraction’ regarding a move to England, and so an offer from Stamford Bridge could prove to be tempting. 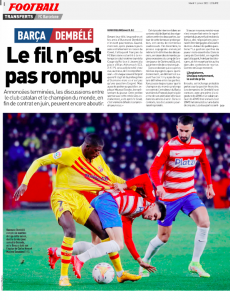 Unfortunately, it’s made clear that no decision will be taken in the ‘very short form’, and so the ‘soap opera’ regarding his extension will continue.

At the minute, the main stumbling block is the financial side of things, with Dembele demanding a €40m signing bonus and an annual salary of €40m gross, €20m net over five years.

He and Barcelona are not that far away from each other in that regard, and their latest proposal, with a five-year extension, would come close to the winger’s demands when bonuses are taken into account.

Nothing is done at this moment in time, though, and so that gives Chelsea an opportunity in a race they are very much a part of.