David Alaba has just over six months left on his contract and with Bayern Munich hesitating on a new offer after withdrawing their latest proposal, the 28-year-old will be free to negotiate with other clubs from January 1st.

Earlier this week, SportBild reported Pini Zahavi is looking to place his client at another club and Chelsea have emerged as a potential option.

Real Madrid, Barcelona and Paris Saint-Germain are discussed as other three options for the defender.

Today’s edition of AS explains the Austria international is getting closer to Los Blancos, but the La Liga winners are not the only club to show interest in him.

It’s claimed clubs such as PSG, Barca, Juve and ‘especially Chelsea’ see that a ‘player of his stature’ can arrive on a free transfer.

Alaba has made his conditions clear to join another club and that includes a high salary and a ‘significant amount’ in signing on bonus. He has made his demands known through his agent, Zahavi. 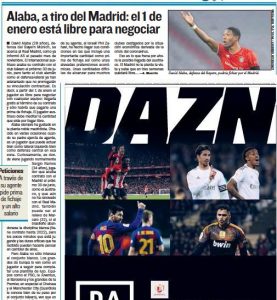 AS explains the versatile defender’s high demands is what’s stopping him from joining Zinedine Zidane’s side. The newspaper adds the conditions set by Alaba are ‘difficult’ for clubs to meet in the post-coronavirus era.

Alaba can operate as both a left-back and centre-back, and Frank Lampard’s side have already strengthened these positions in the summer.

With Chelsea’s interest in the Bayern player pushed forward again, it remains to be seen whether they will want to sign him after this season.