Home Europe ‘The envelope was plentiful’ – Wolves have made €30m approach for defender...
SHARE

Wolverhampton Wanderers have seen a €30m offer for Monaco defender Benoît Badiashile rejected by the Ligue 1 side.

That’s according to L’Equipe, who say Bruno Lage’s side made an approach ‘these past few days’ for the centre back.

They state that Badiashile ‘does not intend’ to leave Monaco in the January transfer window, but the case is not closed and could change.

Monaco ‘turned a deaf ear’ to Wolves’ first approach, a ‘generous’ envelope containing €30m, but that might not be a stance they maintain.

Badiashile has often been referred to as a defender with great potential and is on the radar at a number of clubs in Europe.

Wolves are one of them and have been a ‘longtime suitors’ of the player, who already has 104 professional games by the age of 20. 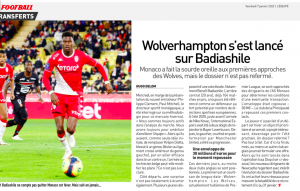 They approached Monaco officials to determine the terms of a possible deal, and ‘the envelope was plentiful’, but the Principality club rejected these initial contacts.

The player does not intend to leave this month and would prefer to do so in the summer if there is an interesting project presented to him.

However, the issue is not a ‘closed file’, and there could be another bid before the end of the window, with Newcastle also thinking about it.