In news that will fail to shock every single Tottenham fan, Daniel Levy and co. have kindly dismissed AS Roma’s attempts to acquire Toby Alderweireld for less than his release clause.

Once again, every single newspaper in Italy is on the case, as Gazzetta dello Sport, Corriere dello Sport, Il Tempo and Il Messaggero all say the same thing: no discounts from Spurs.

Franco Baldini, who made a trip to London to meet the Tottenham board and discuss a transfer for the Belgian, has so far failed in his attempts to soften Levy’s stance, and Roma’s director of football, Gianluca Petrachi, made it clear that’s all he was there to do.

Getting transfers over the line remain his business, and Baldini is just there to see if he can knock off a few million off the asking price. 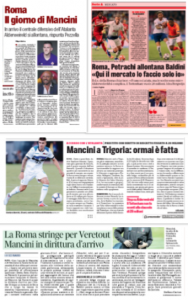 Unfortunately, he hasn’t so far, and if Roma want to sign Alderweireld this summer, they will have to do what any other club would have had to, and that’s pay the €28m or so release clause in his contract.

By having to do so, what was optimistically labeled as a feasible transfer has now become ‘complicated’.

To think they actually started off by trying to get him for €10-12m still makes us chuckle to this day.