Each Saturday, the weekend edition of Jornal de Noticias has a sports pull-out called Ataque, and each week they tend to lead with a big story on Portuguese football.

Today, the cover star involved is Joao Moutinho, and it’s said the midfielder is coming to the ‘end of a cycle’ at Wolves.

In other words, he’ll be leaving the Premier League club when his contract expires at the end of June.

That’s because, as Jornal de Noticias say they’ve been told, Moutinho has not received a renewal proposal from Wolves.

Bruno Lage is said to still trust the 35-year-old, but it’s also explained Wolves themselves are looking for something of a fresh start in the summer and, as it stands, Moutinho isn’t part of that. 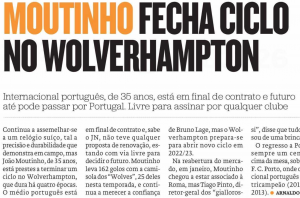 A return to Portuguese football is said to be on the table, but nothing has been finalised yet, and this splash from JN may be partly designed to encourage clubs to come forward with offers.