Luke Shaw’s been outstanding for Manchester United this season and one of the reasons for his resurgence is down to the competition he has from Alex Telles, who arrived at Old Trafford from FC Porto last summer.

Telles has been restricted to only six league appearances and the Red Devils could use him as in signing a new left-back.

That’s according to Record, who say United have an interest in signing Sporting’s Nuno Mendes.

An ‘English emissary’ has offered Telles to the Portuguese club as ‘a bargaining chip’ for signing the 18-year-old. United want to beat competition from Manchester City. It’s the same emissary who was involved in helping the Premier League side sign Bruno Fernandes.

Sporting have said ‘yes’ to the inclusion of the Brazil international as part of the deal, but there needs to be clarity over certain aspects to conclude the deal. 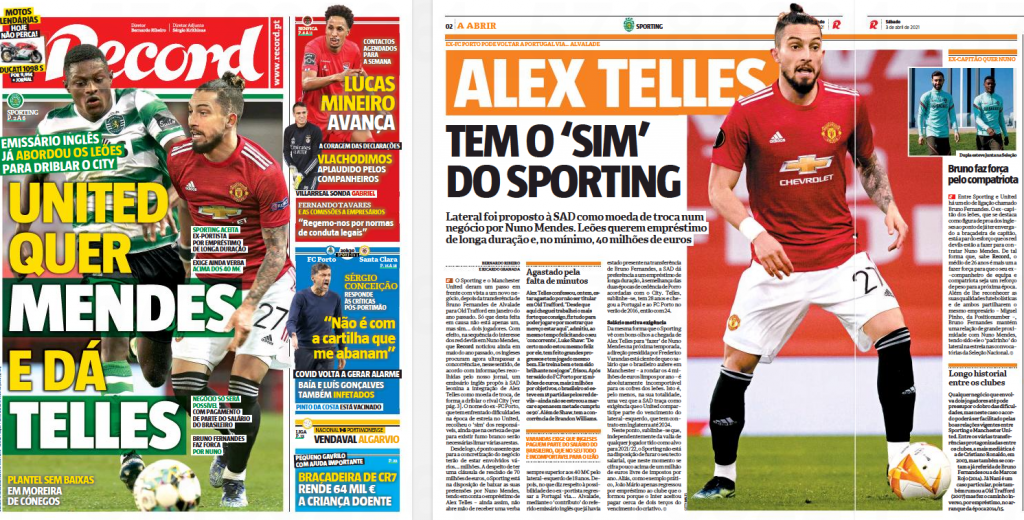 Mendes has a €70m release clause, but the newspaper explains Rúben Amorim’s side are ready to do business for €40m, provided the South American is allowed to join them on a loan deal.

Telles earns €4m net per season at Old Trafford and these figures are ‘unaffordable’ for the Lisbon based club. Sporting would want United to take care od part of his wages, for them to consider allowing Mendes move in the opposite direction, for €40m.

Record also explain Bruno Fernandes, who is aware of the effort made by his employer to sign the fullback, is pushing for his compatriot’s arrival at the club. The Portugal international has a good relationship with the fullback and both share the same agent.