Real Madrid’s Lucas Vazquez has emerged as a transfer target for Arsenal, this has now been pushed several times in Spain, and it’s also covered by AS on Friday.

Unai Emery ‘insists’ on taking the 28-year-old to the Emirates in the summer transfer window, according to the claims. It’s worth noting that a lot of the articles on this rumour have been pushing Emery’s desire for the player.

The former Sevilla manager has urged the north London club to get the winger’s transfer done, which is why the Europa League runners-up have submitted a proposal to Los Blancos.

Arsenal have made an offer of €30m, which is not sufficient for the La Liga giants as they will not accept the Spaniard’s sale for a fee less than €40m.

It’s explained the negotiations between the two clubs is still open.

The Premier League side’s idea is to convince the 13-time European champions to accept a €10m bonus, on top of the €30m, which would depend on how Vazquez does.

AS explains the ‘final agreement for the transfer can be closed within a maximum period of three weeks’ before the two clubs face each other in a preseason friendly in the US. 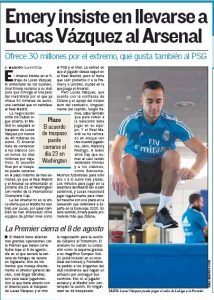 PSG are also interested in Vazquez, but his desire is to stay at Real Madrid.

If he has to leave, he would prefer a move to the Premier League and more specifically a club from London, which is handy for Arsenal.

In an online article, published around 4am this morning, AS have it slightly differently.

Their update suggests the final price could be €32m, plus a further €3m in bonuses, and they add: ‘The transaction could be closed early next week if the English team convinces the player with an attractive offer.

‘Lucas Vazquez has decided for Arsenal in the absence of knowing the economic offer of the Gunners, who will do everything on their part to convince him, an express request of his coach, Unai Emery. The player could press in the negotiation with the offers that have also received from Inter, Bayern and PSG, three clubs of the European elite that have also set themselves in Lucas.’

Interestingly, Christian Falk, the German journalist closest to Bayern, has since confirmed the AS claims about Bavarian interest are correct, although they’ve not made a transfer offer yet.

It feels like there’s something in this one, and that there’s been progress made since the first AS article was published.