Unai Emery ‘loves him’, and sees Dembele as the ‘ideal player’ to play alongside Pierre-Emerick Aubameyang. Robert Fernandez has been replaced by Eric Abidal as the club’s technical secretary and the former had always defended the World Cup winner.

The Catalan newspaper claims that if an offer of €100m is made for Dembele, the La Liga winners will be tempted, a year after signing him for €105m plus €40m in variables.

Even their coach doesn’t talk about him with ‘too much passion’ and his sale would help them raise funds, something they are lacking at the moment. 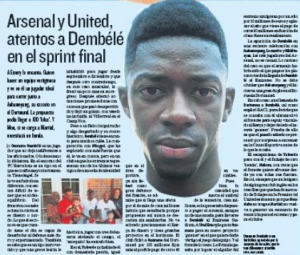 That would see them take Dembele on a €10m loan deal with an option of paying the remaining €90m next summer.

Manchester United interest is stated as being on the condition Anthony Martial leaves the club, and it sounds like pure speculation.

Arsenal claims are probably similar, but Mundo Deportivo present them as rather more serious.