Over the course of a season and a half, Andrea Dossena made 31 appearances for Liverpool, during which he scored two goals.

Arriving from Udinese for £8m, there were some expectations placed on the Italian, which he never really met, hence his relatively hasty departure from Anfield, as Napoli welcomed him back to Italy with open arms.

However, speaking to Corriere dello Sport, Dossena has made it very clear that while things at Liverpool might not have gone as well on the pitch as he might have liked, he still loved every minute of his time at the club.

He said: “The magic of Anfield, eighteen unforgettable months, in an inaccessible temple of football, because to get a season ticket, at that time, you had to wait even five, six, eight years. Then I went back to Italy and chose Napoli, where I discovered the overwhelming passion of the south.”

As for why he chose Naples: “It was a choice that gradually matured, that of returning, and which was immediate when Ricardo Bigon, the sporting director of Napoli at the time, called me. Liverpool was a fantastic experience in an extraordinary team, with Gerrard and Torres, Xabi Alonso, Mascherano and Lucas Leiva. 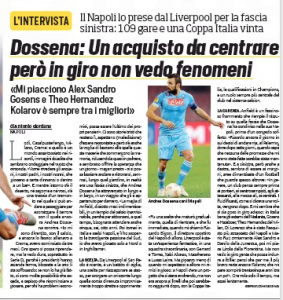 “But I was playing less than I expected and then got back into the game: in Naples, there was a project that was evolving, but it was not yet at the levels that would later be reached.”

During his three years in Naples, Dossena made over 100 appearances for the Serie A club, although he did struggle towards the end, which is when a loan to Palermo was arranged.

After that, Dossena returned to England by moving to Sunderland for a season and then spending 10 months or so at Leyton Orient.

He also went on to play for FC Chiasso in Switzerland and Piacenza in Serie C before calling it a day in 2017.