It’s now probably fair to say that Italian newspaper Tuttosport is getting a little obsessed with Harry Kane.

The outlet has had several stories about the Tottenham Hotspur star in the past few days, mostly claiming that Juventus would be interested in him.

Today, they bring a story focused on the competition from Real Madrid for the striker, ignoring the part where they should talk about Juve’s chase as well.

They say Real Madrid are looking for a centre-forward who can deliver goals and make them forget about Cristiano Ronaldo, who left for the Old Lady 2018. 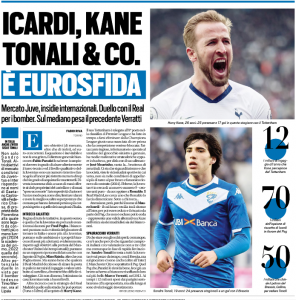 There’s nothing about talks or bids from the Spanish side, as it’s only claimed that they should battle Juve for the signing of either Kane or Mauro Icardi from Paris Saint Germain.

Tuttosport continues to be confident that Kane could leave Spurs next summer as they’re expected to miss out on the Champions League next season.

But the newspaper continues to bring very little information on a rumour which they try to turn into a saga by writing daily stories.