At least one of them was supposed to leave the club this summer, but both ended up staying and having a big impact at the start of the season.

L’Equipe says something pretty interesting regarding Aouar, who was wanted by Arsenal in the last transfer window.

They report that the Gunners chose to go for Thomas Partey instead, and their option shows that Edu Gaspar’s word ‘obviously had more weight’ than Mikel Arteta’s. 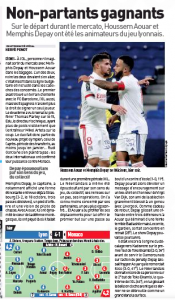 They don’t develop a lot more on these claims, but it pretty much sounds like the manager wanted the Lyon player, and the director insisted on getting the former Atlético Madrid midfielder.

Lyon are glad to have kept both Aouar and Depay, who was supposed to move to Barcelona.

Now, as they don’t know for how long the duo will stay in France, the Ligue 1 side are simply enjoying every match played by them, who are safe at the club at least until January.