Leeds United defender Pontus Jansson has spoken to the Swedish media in the aftermath of his country’s defeat to Spain, and he’s defended Sebastian Larsson for giving away a penalty.

The AIK midfielder has come in for criticism on social media for allowing Spain to open the scoring during Spain 3-0 victory on Monday night. This is something which is repeatedly happening with Sweden players.

Speaking to Hallandsposten, the Leeds United star was asked about the flak his international teammate has come in for since the defeat: “He tries to defend the post and it hits his hand. If he gets s***, it’s just ridiculous. In today’s society, it’s easy to throw s*** at each other on social media.”

Jansson isn’t the only Swedish player to defend Larsson, with the likes of Emil Forsberg and Mikael Lustig standing up for him.

Another Swedish player to come for criticism from his own fans on social media in the past 12 months was Jimmy Durmaz. The Toulouse attacker gave away a free kick in the final minutes against Germany in last summer’s World Cup, leading to Toni Kroos winning the game for his team. 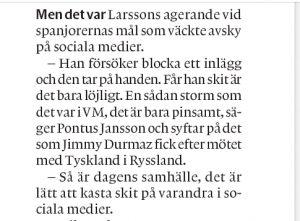 Again, the Leeds United defender was quick to defend his former Malmo teammate after the loss to Germany, although Sweden did make it into the group stages at the expense of the Germans.