Portuguese newspaper A Bola this week had a long interview with Everton goalkeeper João Virgínia.

It’s been a big start to the season for the 20-year-old. He first made his debut for the club in a League Cup game, and now renewed his contract, signing a four-year extension.

The player talked about how things have been going for him, insisting it hasn’t been a difficult decision to take a new deal from the Toffees.

“Yes, I’ve just renewed. It was very easy to reach an agreement, because I’m really enjoying being here and, as such, it was a great pleasure when they showed interest in extending my contract,” João Virgínia told A Bola.

“I made my debut last week, it went well and it was a day to remember. I’ve been at Everton for two years, I’ve been working hard to make my debut and that game was perfect: we won three nil, I didn’t concede any goals and I was one hundred percent. I couldn’t ask for a better debut.

“My main goal was to debut and luckily it has already happened. Now it’s about continuing to work to be able to play more games and put pressure on Pickford. I always want to be prepared because my opportunity may come.” 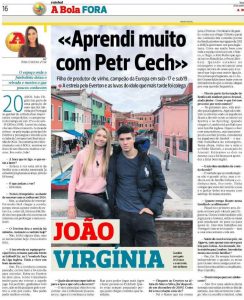 When moving to London as a teenager, João Virgínia had to stay at a family home. He was asked if food was a problem, but he was lucky to have a good chef there.

“It’s true that English food is not a big deal, but she was from an Italian family and cooked well, I was lucky. I had colleagues who were in other houses and their dinner was pasta with ketchup. Just pasta.”

He was asked about what he misses most from Portugal, and food was an issue once again. That’s why he and his girlfriend must go to other English cities looking for Portuguese food.

“Portuguese food, of course. We are always looking for Portuguese restaurants, even if they are a little far away. For us, the trip is always worth it (laughs). And we also often go to Portuguese supermarkets to buy octopus, cod and other things that we can hardly find in English stores and then Inês cooks at home. We’ve already gone to Leeds on a day off which is an hour and a half drive, to go to a Portuguese restaurant, Cantinho do Aziz. There’s also one here and the supermarket is in Manchester.”

Since he first joined Arsenal, he was quizzed if he prefers London or Liverpool.

“I happen to feel better in Liverpool because we have a large group of players who speak Portuguese and that helps me a lot. I hear the three Brazilians (Allan, Richarlison and Bernard), André Gomes, James Rodriguez who also speaks Portuguese and Yerry Mina who learned when he played in Brazil. In social terms, it’s better here because we are going out to dinner several times, we have a good group.”

And when asked about the biggest reference he had as a goalkeeper, João Virgínia mentioned a player he’s had the chance to train alongside.

“Look, I remember having gloves with the name of Petr Cech. I loved those gloves… And a few years later I was training with him, sharing the dressing room and having him as a teammate at Arsenal. Petr Cech was one of my greatest childhood idols and I am very happy to have had the privilege of playing with him.”