Laurens De Bock wasn’t part of Marcelo Bielsa’s plans at Leeds United, so was therefore allowed to go out on loan.

The left-back has had spells at KV Oostende, Sunderland and ADO Den Haag in the last two seasons, and the Whites allowed him to join Zulte Waregem on another temporary deal last month.

Speaking to Het Nieuwsblad on July 23rd, the Belgian admitted he wanted a move away from Elland Road, and didn’t hesitate when Zulte Waregem came calling.

Sport/Voetbalmagazine have interviewed the 27-year-old and asked him five questions. The first one was why he failed to be successful at Leeds.

Responding to that, he said: “I had the misfortune to arrive each time in clubs that were in a negative spiral. Let’s take Leeds: I was immediately in the starting line-up and I played a good first game against Millwall, in front of my family and friends, all present in the stands. My feeling was fantastic despite the 3-4 defeat.”

“Atmosphere in the packed stadium… I thought: ‘As long as it lasts …’

“Unfortunately, the club changed coaches [Paul Heckingbottom replaced Thomas Christiansen] soon after [I arrived] and the new one [Marcelo Bielsa] didn’t like me on the bench.

“Then I was loaned out to Oostende, but there too the results were bad. It is difficult to impose yourself in these conditions.”

Even though De Bock is out on loan, Bielsa’s side still pay part of his salary. This means he doesn’t have to take a pay cut in the short term.

When quizzed if this could hinder his ‘motivation’, he said: “Obviously, earning a lot is nice. Football is my job after all. But I was never motivated by money.

“At the time, I also had the option of going to play in Russia, where I would have got even more, but I did not accept.”

De Bock’s arrival at Zulte Waregem has not pleased a section of their supporters.

“It’s not the desire to convince people that motivates me. Anyway, in football you can never please everyone. We are a demigod when we are successful, but as soon as we go through a difficult period, those who adored you let you down,” the Leeds owned player stressed. 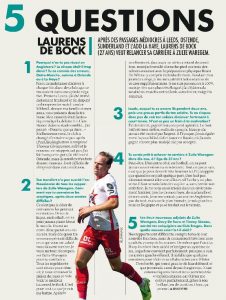 “I especially want to reward Zulte Waregem for their trust. All the ingredients are there for me to succeed, I want to rediscover the pleasure of playing and return to the best Laurens De Bock. That’s what I’m going to fight for.”

“After the lockdown, I was seriously behind in my condition, but I have worked hard for the past three weeks with physical trainer Bram De Winne, including individually.