Manchester United find themselves back in the Champions League big-time on Tuesday evening, as they kick-off their European campaign away to PSG.

Finalists in last season’s competition, PSG will present a big challenge for Ole Gunnar Solskjaer’s side, who will be feeling a little better after their weekend 4-1 victory over Newcastle United.

The match is receiving big coverage in France, and L’Equipe have some early team news in their Monday newspaper.

Leandro Paredes is likely to miss the match for PSG, but it’s stated new signing Danilo Pereira, who arrived from FC Porto in the last window, is fit to play. There’s hope Marquinhos can be fit, after earlier worry he’d miss the match.

Having returned from Brazil duty with a small injury, the defender has been ‘progressing well’ and should that continue then he can take his place in the team.

Julian Draxler and Marco Verratti are also uncertain, with worry being strongest about the latter. 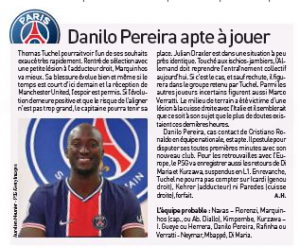 The French newspaper are understandably intrigued over whether Edinson Cavani, PSG’s all-time top scorer, will have a role to play for Manchester United, although they expect him to be on the bench at best.