Inter Milan defender Milan Škriniar has been linked with a move to the Premier League recently, with Manchester United believed to be interested in the player.

The Slovakian FA recently asked the player about the recent reports of an offer from Jose Mourinho’s side, and the 23-year-old revealed the interest makes him happy.

Gazzetta dello Sport claims Škriniar is on the radar of the Red Devils and Barcelona. The Italian newspaper goes on to mention a Manchester United €65m offer received by Inter for the centre-back, which was rejected even before sitting down for discussions.

Inter are keen on retaining their star player. The report suggests Škriniar is close to signing a new deal, which will keep him at the San Siro until 2023. 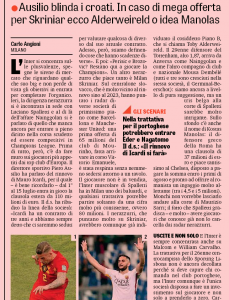 However, Gazzetta also claims the door could be opened for the former Sampdoria man to leave the Serie A outfit in the summer transfer window, and Manchester United and others are informed they’ll need to put down a €80m ‘mega offer’ to start negotiations.

Inter have already identified several players as plan B, if they cash in from Škriniar’s sale. Tottenham Hotspur’s Toby Alderweireld and AS Roma’s Kostas Manolas are on Inter’s radar to replace the Slovakian, if he leaves the club this summer.