Inter Milan quite like the idea of signing Virgil van Dijk from Southampton this summer. The Italian club have received a raft of positive reports on the Dutchman. Not only does Van Dijk fit what Inter want from a defender, but he’s also got leadership skills which have impressed those in charge at the Nerazzurri.

Despite that, there’s a rather big problem. A €50m shaped problem. That’s the figure Corriere dello Sport claim Inter believe they’d be looking at, because that’s what others would be prepared to pay. Inter can’t offer such an amount of money for a central defender, so have had a look down the back of the sofa to see what else may interest Southampton.

Inter would be hopeful that Southampton have an interest in Jeison Murillo and Andrea Ranocchia. The former was linked to Tottenham Hotspur a couple of days ago, which was perhaps more through hope than expectation. 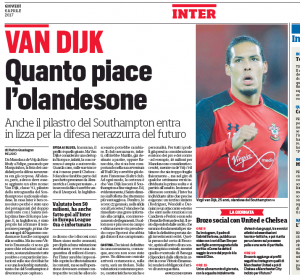 Mauricio Pochettino had sent a Tottenham official to scout Inter against Sampdoria, and Murillo was named as a target.

Pochettino doesn’t need the 24 year old central defender, so it didn’t make a great deal of sense, but there’s a possibility Inter are testing the water for Murillo and linking Tottenham isn’t a bad idea to help that.

Like Spurs, Southampton probably aren’t hugely keen on Murillo, but Ranocchia may be tempting. On loan at Hull City since the January window, Ranocchia would have to continue his progress under Marco Silva to catch the eye of Claude Puel.

Regardless, Murillo + Ranocchia + money perhaps isn’t Puel’s idea of a good deal for Van Dijk. Southampton have been busy scouting this season and, should Van Dijk go, they probably have targets which don’t include Murillo or Ranocchia.