If Jose Mourinho wants to sign Jerome Boateng this summer, can convince the player, and Manchester United put down €50-60m then he has a very good chance of getting him.

After Boateng questioned his own future at Bayern Munich earlier this summer, claims came from Bild that Bayern Munich would sell for a suitable offer. The amount wasn’t shared at the time, but this week’s edition of SportBild puts it at €50-60m.

That the article comes from Christian Falk and Tobias Altschaffl means the information will be well sourced at the German club’s end.

SportBild claim Manchester United struggled to make the signing in 2017 and then when the defender was injured any potential deal collapsed.

Boateng had several injuries last season, although none of them were serious and he still managed to make 31 appearances for Bayern.

With the former Manchester City player turning 30 in September, age becomes a real issue when considering transfer fee, although Boateng is only around 6 months older than Toby Alderweireld. 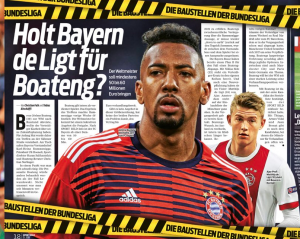 There may be some negotiation on the €50-60m, but not a lot, with SportBild saying that if an offer of that scale doesn’t come then Boateng and Bayern will continue together without a problem.

Manchester City and PSG are credited with interest.