Tottenham Hotspur have been credited with an interest in Lorenzo Pellegrini.

On November 22nd, we carried a report from Calciomercato, who explained Spurs and Manchester United have ‘made enquires’ for the AS Roma midfielder.

The 23-year-old made nine appearances in all competitions this season in which he has already set-up seven goals for his teammates. His current deal expires in 2022 and he has a €30m release clause in his contract.

Saturday’s edition of Gazzetta dello Sport due to his low buyout clause, there are top clubs across Europe courting the Italy international.

The list includes Tottenham and United, along with Juventus and Inter Milan. 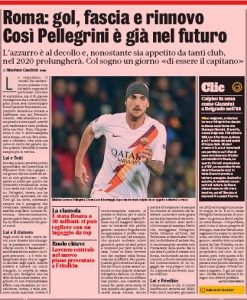 The newspaper states the player will be ‘spoiled for choice’ if he decides to leave the Serie A side, but that is unlikely to be the case.

Pellegrini’s plan is to sign a new deal with Roma and also give up the release clause.

Gazzetta are of the belief he could agree a new deal in 2020, which could come as a blow for the likes of Spurs, United, Juventus and Inter.