As Moussa Marega’s season with Porto continues to be highlighted by the Portuguese press, it’s West Ham who are considered the biggest threat to take the striker from the Dragons this summer.

Newspaper A Bola has a story today claiming that the player’s price has been increased by €20m in a year, going from €10m to €30m now.

And when speaking of interested sides, only the Hammers get a mention, especially for having followed the Mali striker in several of his performances this season.

Marega scored 22 goals in Porto’s title winning campaign, making him the most likely star to leave the club in the summer market. 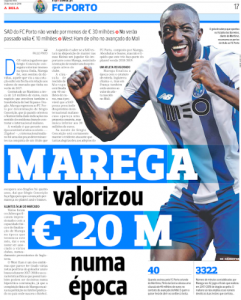 Even though manager Sérgio Conceição doesn’t want Marega to go, it’s very likely that Porto will sell him for the right price. The player is currently protected by a €40m release clause, and the Dragons will only listen to the offers of at least €30m.

Besides West Ham, A Bola believes that unnamed clubs in France are also interested in the 27-year-old.